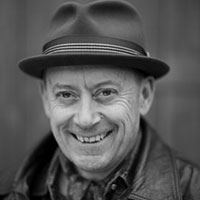 John Whiting spent his childhood in Bexhill-on-Sea before studying architecture in London. His interest in painting and drawing buildings evolved over time to include landscapes and life studies. Art and architecture have always been closely linked and in John’s work each discipline informs the other in a striking balance of rigour and expression. His technical background is evident in his compositions which feature strong lines of perspective and architectural subjects as a back drop in his paintings which are really more about capturing a sense of an experience, with extremes of weather, strong light and movement as recurring themes in his work. He has travelled extensively in Europe, USA and Asia and spent several years living in Hong Kong and Australia. In 1994-5 he exhibited his work in Hong Kong’s Wattis Fine Art Gallery and at the Hong Kong Fringe Club. The Fink Gallery in Sydney staged his first one-man show in 1998. From 1999-2012 John exhibited his work in his own Open House as part of the Brighton Festival. In 2010 John exhibited at the Chateau de Bosmelet in Normandy and at La Linerie Arts Centre near Dieppe in 2013 & 2016. Since setting up his studio adjoining the gallery in 2014, 35 North has exhibited his work regularly. His current exhibition ‘Unlocked’ is showing at the gallery from 1st May to 29th May 2021. For a PDF list of works with prices, download here: UnlockedCatalogue
His work is held in private collections locally and around the world. You can follow John’s work on instagram @jwartbrighton